Opposition figures accused the Syrian regime of hiding chemical weapons in remote Alawite regions of northwestern Syria, defying its international commitment to eliminate its chemical stockpile by the end of June.

A senior member of the Syrian opposition who maintains contact with security officials still working for the Assad regime told The Times of Israel that on April 16, three vehicles arrived by night to Jourin, 100 kilometers (60 miles) northwest of Hama, where the regime’s Mountain Brigade was stationed. According to the officials, the vehicles were loaded with chemical substances, which were then buried underground within the brigade’s encampment.

Electricity was cut to the entire region as the cars arrived, the activist said.

In addition, the sources reported, the regime has been transferring chemical substances and missiles carrying chemical warheads from a research center in the town of Marzaf, 20 kilometers (12 miles) northwest of Hama, to a converted recreation camp northeast of Masyaf, a town lying 50 kilometers west of Hama.

The weapons were placed in secret caves and trenches in the mountain near the camp.

“According to our information, this is not the first time chemical weapons are moved from place to place,” the opposition member told The Times of Israel. “We believe the regime has hidden a large amount of VX (nerve agent) which is extremely toxic.” 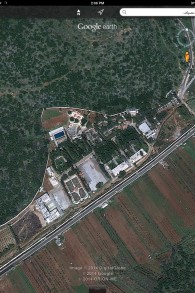 A satellite image of the compound northeast of Masyaf where the Assad regime is reportedly stockpiling chemical weapons (photo credit: Google maps)

Before agreeing last September to hand over his entire chemical stockpile to the UN, Bashar Assad held some 200 tons of VX, he added.

“How much of this he has handed over, I do not know,” the opposition figure told The Times of Israel.

The Times of Israel could not independently confirm the information, and the Organization for the Prohibition of Chemical Weapons, which is overseeing the destruction of Syria’s chemical stockpile, did not respond to a request for comment.

An opposition activist from Hama said that in the early days of the Syrian uprising the camp — which contains tents, and a swimming pool and was used for civilian recreation — was converted into an enclosed military research center. The entire mountain behind the camp has also been surrounded by newly dug trenches, visible in satellite images of the area.

The new information confirms an Israeli report revealed by the Sunday Times in February, whereby Assad has been stockpiling missiles with chemical warheads in Alawite areas west of Hama.

Last week, UN Secretary-General Ban Ki-moon informed the UN Security Council that the June 30 deadline for totally eliminating Syria’s chemical weapons will not be met, because the Syrian government says the final shipment of dangerous chemicals can’t be transported safely.

The UN chief said in a letter obtained last Wednesday by The Associated Press that 7.2 percent of Syria’s declared chemical stockpile remains in the country. He said the government insists it doesn’t fully control security in the area where the chemical agents are stored and has “serious concerns about the safety and security” of convoys that will transport the material to the port of Latakia.

But the Syrian opposition member estimated that the regime is hiding “no less than 20 percent of its chemical stockpiles.”

“These 20 percent are enough to destroy the entire Middle East,” he said.

AP contributed to this report.